Lancashire played a great role in England’s industrial revolution, and was home to vigorous textile industries that grew quickly in the beginning of the 19th century. Technological advances in water and steam power increased the possibilities of manufacture in the area, and allowed the whole county to develop into a major manufacturing base.

Manchester in particular was affected by the massive growth of the cotton industry- at one time, it was known locally as ‘Cottonopolis’. The city was dominated by large seven or eight storey factory buildings- Karl Schinkel, a German architect who visited the city in 1825, wrote that they were so black, they looked a hundred years old already, due to the pollution caused by combustion from industry. The factories mechanised processes that had previously only been carried out by hand, speeding up the rate of production and standardising the cloths and yarns made.

However, the working conditions for many were less than ideal- unscrupulous employers often hired very young children, subjected employees to beatings, to fines for lateness, and general abuse or discrimination was rife. The factories and mills could be an intimidating work environment too, with dangerous heavy machinery and incessant noise and fumes- diseases spread quickly throughout. 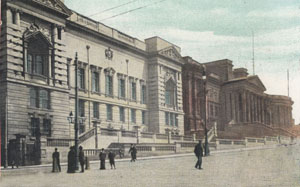 
However, the factories provided mass employment, and it can’t be denied that they were an economic success- the production, spinning, weaving, bleaching and dyeing of cotton dominated Lancashire’s trade, and by the middle of the 19th century, Lancashire completely dominated the world market in textiles, employing around 5% of the English populace. This was a phenomenal accomplishment, and the county was hailed a model of industrialisation. The famous streets of terraced houses were often owned by factory masters, and working together in factories and living next door to one another in houses created a unique kind of community spirit amongst workers at the time.

Fashion in the 1800’s was less a palette for self- expression than a means of ostentatiously displaying your wealth and social status.

The advent of the sewing machine in 1851, invented by Isaac Merrit Singer, enabled women’s fashion to move faster than ever before. The illustration below of London Christmas fashions for 1878 shows this change; advertising numerous dresses, materials and patterns, they are clearly set up for mass production on a scale that would have been impossible before Singer’s machine arrived.

The dresses most women wore were dictated by the latest styles produced by couturiers like Charles Worth, an Englishman who worked in Paris. As with fashion today, these styles, seen on royalty and members of the aristocracy, were copied and cheaper versions of them worn by the less wealthy and the working class. The originals though were beautifully made in luxurious combinations of silks, taffetas, velvets and brocades.

Magazines produced illustrations (such as these seen here) to inspire their readers. Victorian codes of public morality meant that women had to cover up; and they certainly took this advice, wearing layer upon layer of clothing, and creating dramatic silhouettes with enormous bustles and corsets so tight that they endangered their health! 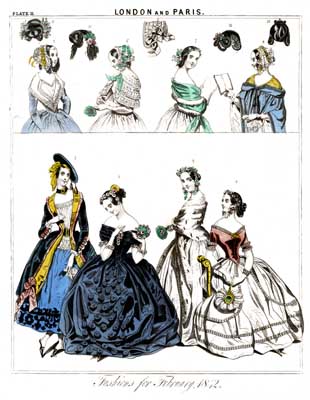 Illustrated, above, are the latest London and Paris fashions for 1842.

Christmas and New Year’s Party Fashion 1878-1879. No 53 of the New Extra Enlarged Fasion Plates of 20 Figures Comprising 13 Ladies' and 7 Children's Dresses of The Latest Fashions

The poster, above, was published in the Young Ladies’ Journal and advertises the latest dresses available from D Nicholson & Company of 50-53 St Paul’s Churchyard and Paternoster Row, Corner of Cheapside, London. They describe themselves ‘as silk mercers to the Queen and outfitters to all parts of the World’, stating that ‘all the goods represented in the above illlustrations as well as prices and particulars may be had gratis upon application’. They offered ‘1,000 patterns of newest silks and dress materials sent post free’.

This extract is taken from the introduction to Cassell’s Book of Sports and Pastimes:

“The benefits of athletic and other manly exercises, from an educational as well as a recreative point of view, are now very generally recognised. There is no better means of promoting a healthy action of the body or of bidding defiance to the doctor than a moderate indulgence in sports and pastimes.”

Throughout the Victorian period, sports and recreation in general became hugely popular for both men and women. Newly available leisure time and greater prosperity in the second half of Victoria’s reign meant that people needed to find activities to fill their time, and a social world started to develop around sports, paving the way for today's sport-loving nation. Many of our most famous football clubs originated around this time, including Aston Villa and Everton, which were started by churches to attract more visitors, and Arsenal, which was created by a group of factory employees; and the FA cup was first played in 1871. Cricket was hugely popular, and large crowds gathered to see the Grace brothers play in a celebrated test match between England and Australia in 1880 (England won).

Some sports were restricted to the wealthy, like hunting or shooting, but almost everyone could afford to cycle. The bicycle, made widely available between 1870-90, allowed people to travel outside of cities at weekends to the countryside beyond, and to form cycling clubs. These trends were officially encouraged because “not only are these exercises of supreme importance in maintaining a vigorous state of health in our boys, they have also a peculiar and decided value in what may be called a moral sense.”

However, this sense of morality and fair play, which football in particular was thought to promote, was perhaps a little hopeful: free kicks and penalty shootouts were introduced (in 1877 and 1891 respectively) to stop cheating! Many sports like boxing, cricket and football, had been around in one form or another for centuries, but the Victorians applied strict and sometimes bizarrely detailed rules to all, refining them into the games we know today.

You can find out about the games your ancestors may have enjoyed in the free downloads below from Cassell’s Book of Sports and Pastimes. Some of the sports you will recognise, although the rules may have changed somewhat; others are very different and some you may not have heard of! And if you’ve ever wondered how to ride a penny-farthing bicycle, you can find out by clicking the bicycling link.